Further Press Release 25th September 2019: Freddy McConnell known by the press ‘as the man that gave birth’ fights for equality

Karen Holden is the founder of A City Law Firm

"As a firm that champions equality we are of course disappointed at the judgement and it highlights how the law is slow to keep up to modern society. Our founder was invited to be given Freedom of the City for her work towards Equality she says ‘this is testament to how the law needs to catch up to the modern day family structures"

Freddy is legally a man and his legal papers display the same. In the UK he has the right to change his gender on his own birth certificate so why not his child's? Surely if you are going to move with modern times the law has to finish the journey it has started.

Equality shouldn’t have to come at a price, but this case has taken three years, hours of work and man power, public attention and yet the courts still failed to help this family set out its actual family structure correctly in terms of its legal status. A birth certificate will stay with a child for life and it will be factually and legally inaccurate under current rules. The case was bought under Article 8 of the Human Rights Act 1998 as we wanted to avoid our client being forced to register as a mother to his child, which we believe is contrary to his right to private and family life within. That this would also be discriminatory against trans and intersex parents.

Freddy is considering whether he wishes to appeal and we have no instructions on that. We hope though others will pick up the chalice as well and look to bring UK law in line with other more progressive countries."

The background of this case is:

Transgender parent Freddy McConnell is in the midst of a major legal battle in the UK for the right to be identified accurately on his child’s birth certificate.

When McConnell launched legal action last year, he simply wanted his child's documents to reflect their family accurately, to be a legal parent and not be forced to register as mother when he is legally now recognised as a man.

Today, McConnell is fighting for the rights of the LGBT+ community around the world by asking only for a choice to be treated with fairness.

The ruling in this lengthy legal battle is now imminent and whatever the judge’s decision in the matter of Freddy McConnell (originally referred to as TT in legal documents) and YY (his child), there is one thing I know for sure – the UK law must change as society has. Without immediate legal reform, transgender men and women are being forced to register as parents they are not legally recognised to be.

As the solicitor representing Freddy in this unprecedented case, I feel when the UK stands up for equality it needs to ensure it goes far enough to protect everyone and right now transgender and other LGBT+ rights need urgent reform.

As a forward-thinking, progressive leader of the modern western world, parts of UK law do not reflect our ever-evolving society. Other countries are reviewing their position and we need to be embracing these discussions.

In 2004, the Gender Recognition Act (GRA) was enacted to govern how trans people have their identity legally recognised, which was completely ground-breaking at the time. Yet, as always, the law never goes far enough and thinks also about the practical realties of applying the law. It currently, as in this case, denies equality, creates inaccurate documentation and fails to serve multiple groups with the LGBT+ community.

Transgender rights have never been so important and the result of this case, could change lives and, indeed, history.

The press challenged Freddy’s anonymity which he lost earlier in the year [TT-anonymity-judgment-150719.pdf] as the court believed it in the best interest of the public. 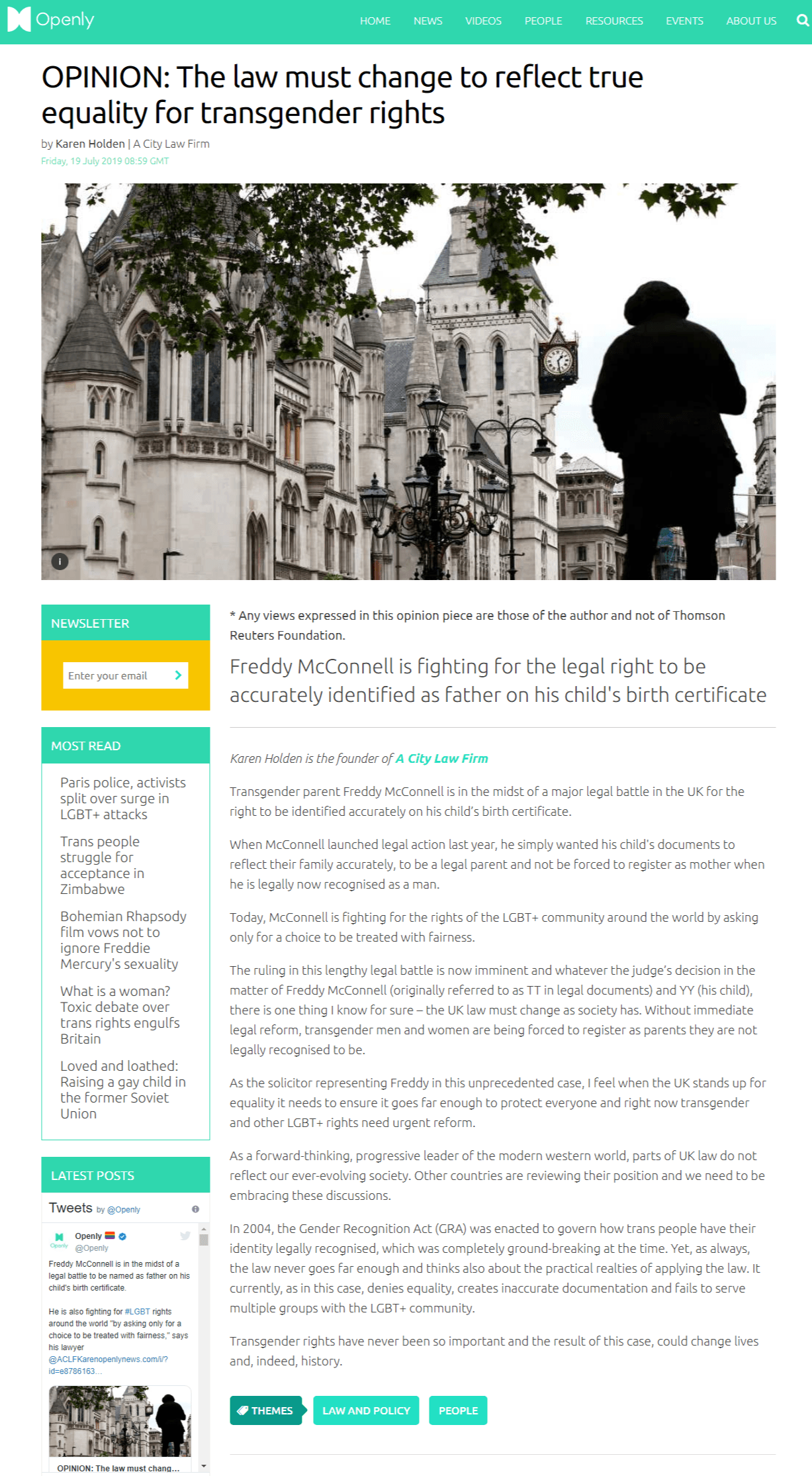