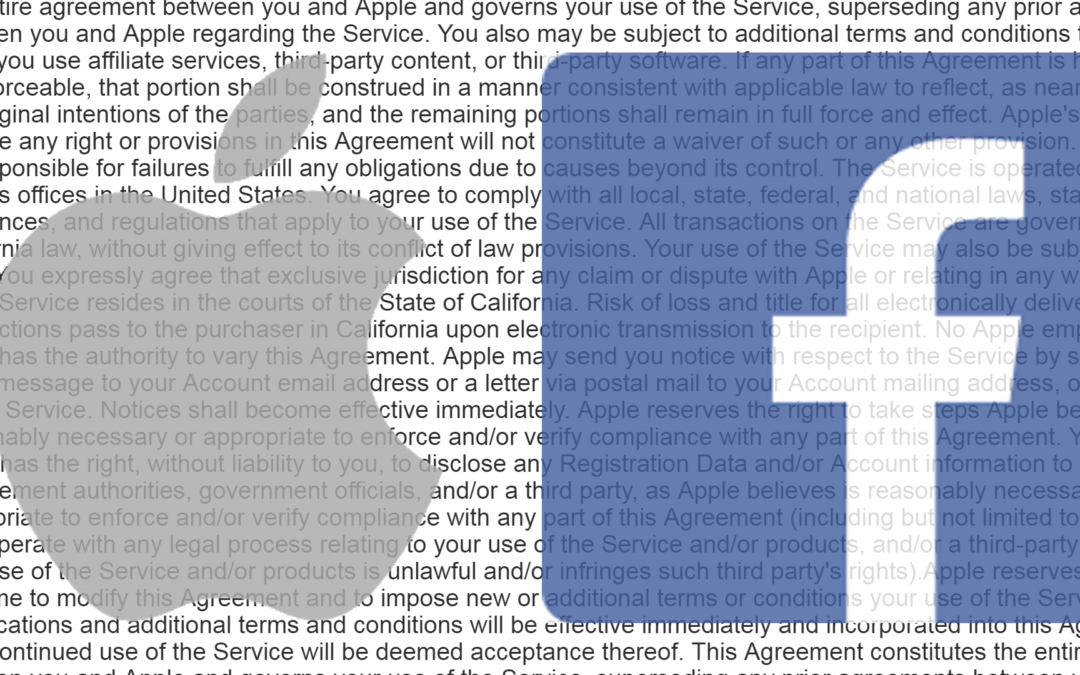 If you gathered 100 consumers in a room and asked them who reads privacy policies or terms of use before they download a Mobile App, how many do you think will raise their hands?

My guess is the 4 or so data protection lawyers that slipped in. And even then, there are instances where those who are the most well versed in this field simply do not have the time to read privacy policies and so just like the rest of us, they scroll past the terms and hit accept.

The thing is – information on how your data will be used by Apps is not designed to be user friendly.

When a consumer downloads an App, they are asked to make an on-the-spot decision on how their data will be used, and the information to help with that decision is usually buried away, in tiny text, in a very lengthy document that is riddled with technical and legal terms. Most people download an App when they need to do something – it is a means to an end – so realistically people will press whatever button necessary to get the App and carry on with their day. The reality is that the average user is more interested in making their latest dance video or getting their dinner than they are in reading terms and conditions (apologies to lawyers everywhere!).

Corporations are well aware of this behaviour and have historically been relying on this method of gaining “consent” to use consumer data.

We have however seen some significant shifts towards more data privacy, particularly following the introduction of the General Data Protection Regulations. Most websites now have a pop up explaining in plain English what cookies are working and how data will be used. Privacy policies are becoming much simpler and therefore allowing consumers to make more informed decisions.

Apple Inc. is now going one step further and intends to introduce “App Tracking Transparency” (ATP) in its iOS 14 software update. In summary, the new technology will flag how an App will use your personal data, what information it can extract and if the information will be sold – and then Apple NOT the App developer, give users the choice to consent to, or prevent, the use of their personal data.

All Apple phones come with a unique device identifier know an IDFA (identifier for advertisers) which allows Apps to track user activity across various other Apps and websites – this is the feature that makes targeted advertising possible e.g., when you google sushi and then have adverts for new Japanese restaurants pop up on social media, which are all close to your house because your food delivery or ride app has your location.

ATP works by cutting App developers at the source – it will block access to your phone’s IDFA number. In fact, the feature will be on by default when iOS 14 is rolled out, forcing Apps to ask users for their explicit consent to use their IDFA.

What is the problem?

While increased privacy and information about data usage is welcomed (especially by those of us who do not enjoy marketing calls, adverts, texts, and emails), the move is considered, by some, to be a major blow for companies which rely on advertising and sales for their revenues – with the strongest opposer to Apple being Facebook.
Those in favour will argue that data sharing and tracking create a better user experience (i.e., it’s easier to find products of interest). In addition, it also helps channel traffic towards small businesses that rely on social media for personalised advertising. Facebook has been extremely vocal about its opposition to Apple’s ATP software, with the launch of its website “Speak Up for Small” encouraging SMEs to share how targeted advertising has helped them.

Is this really about the little guy?

Whilst it is not alone in raising concerns (for example Snapchat expressed support for Apple but noted it could interrupt demand for advertising), cynics would argue that Facebook’s campaigns serve to protect its own interests – it is after all a business that is modelled on advertising revenues. As a user, you do not pay to use Facebook, because you – or rather your activity and data – is the product for sale. Now the flip side of this is, if you take advertising revenue away, would people pay for Facebook? The advertising is why the service is free.

Apple says that it wants to give users more control over their data and increase transparency about how information is used. This stance is nothing new from Apple, and whether you believe it or not, it is worth noting that ultimately, as a seller of hardware, data privacy does not adversely impact Apple’s core business in the same way as a business that is literally centred around advertising revenues. In other words, they can afford to take a moral stance on the privacy debate.

Facebook has argued that Apple is making the changes to adversely affect its competitors. Apple’s iMessenger directly competes with Facebook Messenger and WhatsApp for example. It has even said that the iOS changes would force Apps to become in-app purchases or introduce subscription fees – and guess who will get a cut?

Whist ATP has started a war of words between the tech giants, there is no clear evidence on how advertising revenues and sales will be affected. Nor has Apple introduced any changes to its commissions policy (it has actually introduced lower commission rates for SMEs earlier this year).

It remains to be seen how SMEs, large businesses and users will respond to the changes. If it helps Apple’s business, and if its competitors over at Android implement similar software.

Businesses study human psychology so will no doubt think about how best to target customers when it comes to advertising even with the changes e.g., by making their policies clear and user friendly. And in any case, it is likely that many users will continue with the “scroll and click” without checking the default setting.
For the remainder, it is worth noting that the changes do not actually prevent Facebook and other apps from tracking or collating data, and that privacy policies always came first – what has changed is that for the first time, the power is in the hands of the consumer in a more meaningful and obvious way – so they will have to ask permission first as usual, but this time – clearly.