Is Marriage the same as living together? 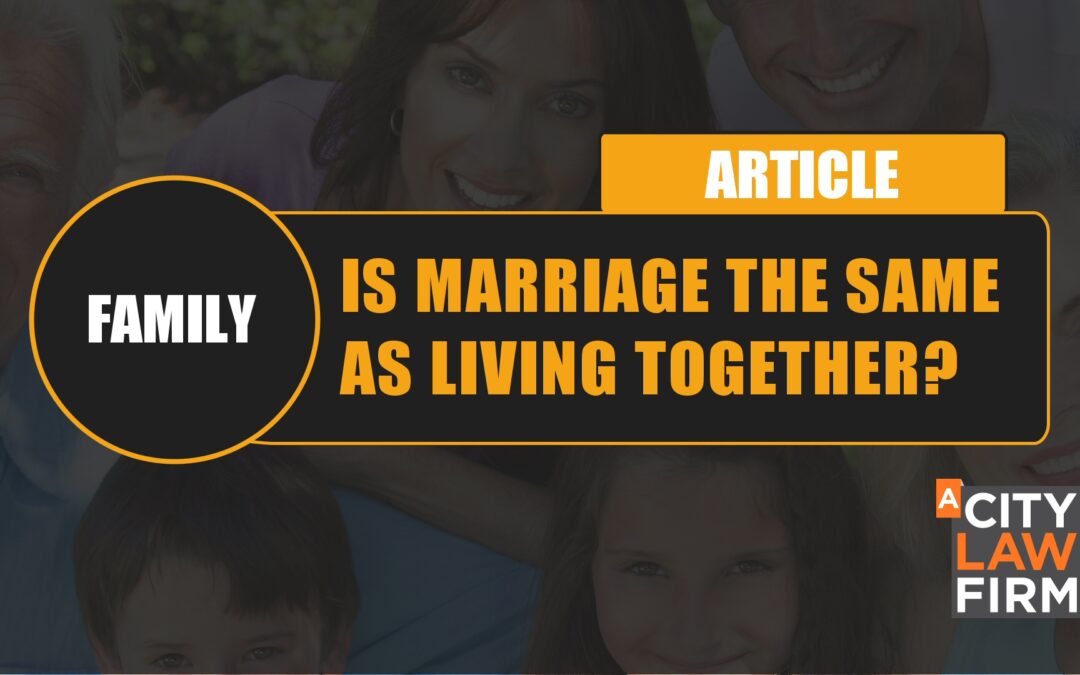 Now adays there are many ways couples and families co-exist from marriage , Civil partnership and cohabitation which each have their own legal wrappings , risks and benefits.

Cohabiting with your partner is not the same as being married or being a civil partnership. They do not have , for example, the same automatic rights to income, pensions, capital and inheritance rights on the death of your partner as married couples do. Marriage is a legally binding contract after which point the parties’ assets and liabilities are considered to be , in the most part, joint. Obviously exceptions such as pre or post nuptial agreements ; property trust deeds; children ; POA and Wills can vary this position to some degree.

It sadly for many does not matter how long you live together, you still do not gain the rights of a divorcing spouse even if you have cohabited for a very long period of time without getting married. This is particularly so often regarding pensions and marriage allowance for example.

Some cohabiting parties will have a legally binding cohabitation agreement , similar to pre/post nuptial agreements , setting out their expectations of each other financially, especially when they hold property together which is when we would certainly suggest that you have one of these drafted by a specialist family solicitor.

The Financial Aspect – What does ‘Joint Assets’ mean?

After parties are married, their assets and liabilities are considered joint until such time as a Divorce is finalised and a Financial application issued. This will affect, bank accounts, savings, real property, investments and shares, mortgages, credit card debt, personal loans, inherited wealth and pensions unless contracted out by various means as reflected above.

This assumption can be altered by a Pre/post-Nuptial Agreement, that whilst currently not legally binding is very persuasive . We would suggest that all parties have one when there is particularly an imbalance of wealth for example, even if you already agree that all assets would be split 50/50 on divorce.

Should I have a Pre-Nuptial Agreement and what is it?

We do strongly advise our clients to have a pre-nuptial agreement, setting out what will happen with the parties’ finances during the marriage and on divorce. It may not seam romantic but it’s a hopefully a platform of comfort between couples. There are requirements around when and how pre-nuptial agreements can be signed so make sure you use a reputable solicitor who suggests full disclosure is undertaken and that the other party takes independent legal advice.

A pre-nuptial agreement can resolve issues before they arise by setting out what the parties have previously agreed. This means that on separation, parties have the option to simply follow what is set out in the document to separate their finances. They will then have little need for solicitors except to draft that agreement into a consent order.

Pre-nuptial Agreements however are not binding in UK courts. They can be a persuasive indication of what the parties intended at the start of their relationship and the courts will take them into account if several requirements are met. Ultimately the courts need to be satisfied that the parties’ assets are divided in a ‘fair’ way, and that each spouse will provided for with reference to the s.25 factors. This will be impacted if children are involved.

Do I need to update my Will if I get Married?

If you had a Will, then on marriage that Will needs to be amended and re-executed unless ‘drawn up in contemplation of marriage’. It would be prudent therefore, for parties to draw up a new Will before the wedding so there is no gap whereby your old will is not valid and you have not yet signed your new Will.

Would a Civil Partnership be better for me?

The main differences between marriage and a civil partnership are:

There are many other things to think about, before a wedding or sadly upon divorce , such as pensions, jointly held property, children and tax implications.