Matrimonial Law: The impact of 2022 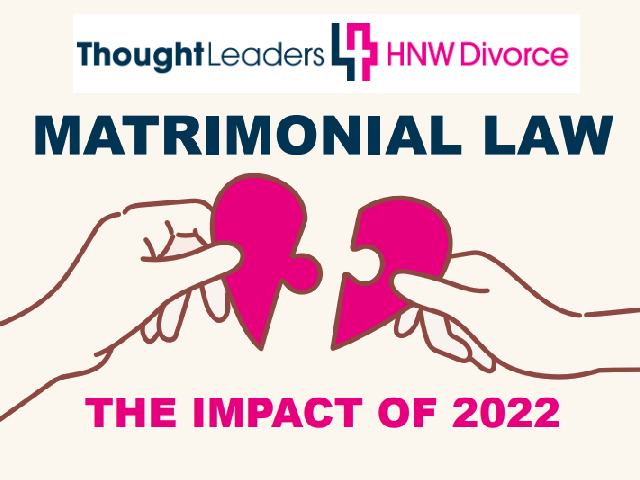 2022 has seen the most disruption in Matrimonial law for many, many years.  The introduction of the Divorce, Dissolution and Separation Act in April and the No Fault Divorce that came with it, has been a change welcomed by many practitioners.

The no fault element is far more reflective of modern times and of the ‘on the ground’ situation for many married couples facing the end of their road.  It has avoided the un-needed hostility caused by the Unreasonable Behavior petition, that is the only option if they are not wanting to wait for two years to issue the application.

The parliamentary concern that was that the no blame divorce would lead to it being too easy to walk away from the sanctity of marriage does appear to have been alleviated. The application has a ‘cooling off’ period of twenty weeks from issue. Once the window of twenty weeks has elapsed, the Conditional Order can then be applied for, six weeks and one day from then, the Final Order can be applied for. Many may want a swifter means of divorcing and we did believe this process would be quicker than the traditional route, but the sanctity of marriage and time to reflect seams to still to be an important factor in the legal process.

The initial twenty week waiting time may seem somewhat credit agreementesque but it does avoid the rash, fueled applications progressing in a costly and acrimonious manner. Statistically Christmas Day divorce applications do appear and we as lawyers see these impulsive decisions and without needing to attribute blame, could after heated words, a cold turkey and several vinos, seem to be the best gift ever. The twenty-week period thereafter could provide reflection time as to whether it actually is.

Not only is no fault required, but both parties can apply together rather than in opposition. The collaborative nature of the joint No Fault Divorce application and the compliance required from both parties to progress, is encouraging for the surrounding and often more problematic issues when the marriage ends, such as finances and arrangements for children.

The idea of a joint application does somewhat re-frame the traditional McCartney v Mills idea of divorcing couples. The adversarial, costly, bitter divorce and financial proceedings do appear to be heading into a more efficient, conciliatory, calm water which for the couples involved, is no doubt the better option. For those charging on the hour and thriving off of the contested elements of the bitter marital dispute, their days may appear increasingly numbered. However, its key to note the divorce alone does not resolve the finances, property and children these still are strongly advised to be considered; advised upon and legally supported.

All about the children

The No Fault Divorce joint application also naturally lends itself to the more amenable Parenting Plans, detailing the arrangements, holidays and key issues. There are also now specific apps on the market, such as Amicable: the co-parenting app which designs shared calendars and communications for co-parenting. This has been created to help manage aspects of co-parenting in one place. Clearly there is a market for such, and it can only assist the simplifying of co-parenting arrangements after divorce.

Resolution, always at the fore of family law matters, are also now pioneering, the One Lawyer One Couple approach, which again sits well with the No Fault Divorce landscape. This seams though unnatural and against the grain, but done wisely could this keep costs down, support a swift and amicable separation for everyone?

Resolution says it has liaised with the SRA to ensure the model operates within current regulations. Ordinarily Solicitors cannot act for both sides of a matter and if there is an own-interest conflict or a significant risk of one. The rules prevent solicitors from acting for both sides in a litigation or dispute but acting for both parties is allowed where there is no significant risk of a conflict arising.

A model whereby one solicitor can advise and guide a divorcing couple on for example the financial positions, is revolutionary from the hostile positioning of’ get what you can -get the MIAM signed and get to court approach.’ The idea is that the joint nature of the divorce itself, lends itself to many other post-marriage joint enterprises, often the first of which is the financial settlement. This will reply heavily on transparency , honesty and the desire to work together.

The benefit in doing so is that it avoids the expensive, combative approach and the loss of voice which can sometimes be felt, along with the inevitable dwindling of the matrimonial pot in legal fees. It is no doubt more time efficient and allows for an overall more empowered, collaborative approach to the division of the assets and arrangements on income, which is particularly beneficial when there are children or co-owned businesses involved.

In an ideal world, every divorce and the financial settlement would be reached amicably. One joint application, one lawyer advising on the perimeters of financial agreements and a Consent Order submitted making provisions that were borne of harmony rather than huge discord and resentment. Clearly this approach will not work in every case but the fact it is now there as a possibility, is something which ten years ago, would never have been envisaged.

Battling it out at court

The court system currently does not lend itself to quick resolution and in doing battle in such a way, the delays, costs and last minute cancellations of Hearings, means there are two losers rather any one winner. Well, strictly speaking there is one winner, which is the charging by the hour, stereotypical circa 1990s lawyer’s billing figures but as they are not party to the battle, they should not really win! Many lawyers , like the author, charge capped or fixed fees , but if the battle becomes protracted even this approach can fail.

There is no criticism of contested proceedings as they are sometimes needed and for some the only progressive route. However, the preference for spending time and money alone, is very rarely contested proceedings and when the couples can be advised together, the hope is that the avoidance of such will increase.

The Future of Family Law

Overall , the No Fault Divorce and the new pioneering joint application process has opened the door to many other joint processes which can only be of benefit. Reasoned, balanced advice on a joint basis gives the divorcing couples the autonomy to choose whether they wish to throw themselves into acrimony and contested court proceedings or navigate the post-divorce financial matters and the governing Matrimonial Causes Act 1973, in a co-piloted way. It will not suit all but the ability to decide whether it will, is a fundamental change to the family law world. For divorcing couples, the re-branding of family lawyers as joint assistance, rather than one’s adversary, is beginning.

We are excited to see how these innovative and disruptive changes will develop the divorcing landscape . We are prepared for the phases, the successes and the failures, in a hope we can evolve the overall process and help many families part ways effectively and avoid ripping their families apart.