"It now seems sensible to assume that social distancing restrictions will remain in place for many months and that it is unlikely that anything approaching a return to the normal court working environment will be achieved before the end of 2020 or even the spring of 2021". - Sir Andrew McFarlane 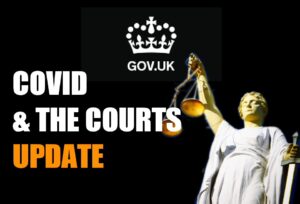 COVID-19 and the Courts

As a result of the COVID-19 pandemic, the courts have had to adapt in a way that they had previously resisted doing but when it became a necessity, they were quick to adapt to a new way of working which has also been virtual. The justice system, which is already under a lot of strain, has had to prioritise cases, introduce new working practices and implement new procedures to minimise risk to all involved. Whilst some delays have been seen, the overall situation is not as dire as it might have been, had the courts not been so quick to adapt to new working practices.

The English Courts are traditionally reluctant to embrace technology but COVID-19 has shown that they have been extremely receptive to change. It is hoped by many that active embracement of technology may help to streamline the current court processes and lead the way for a more expeditious process in the future.

The Courts were in the process (about halfway through) a £1bn project to introduce technology for remote services into the courts, so some systems actually had technology already in place when the virus struck.

Currently, judges are deciding if a hearing is necessary and then further deciding if it will take place remotely, be it partly or fully. Current arrangements include video and telephone hearings with different courts adopting different technology to process as many hearings as possible.

Whilst it may be argued that people are not getting the justice they deserve, there has been no significant increase in appeals or overturned rulings that would suggest this. There may be significant delays in some cases, due to hearings having some teething issues and inherent delays with using technology, but the justice system is coping well with all things considered. The courts have also been allowing those who believe a virtual hearing to be unfair to their case, the chance to have a socially distanced hearing in person.

As of 17 July 2020, most courts and tribunal buildings have opened in line with government advice. Data has shown that there is surprisingly little backlog or delay in the business/commercial and property courts. Other courts, however, are showing delays with speculation that the backlog will not actually return to a normal level until well after the new year and maybe for 18 months. In particular, the employment tribunal, which has been inundated with claims due to the redundancies brought about by the pandemic, is experiencing a 10-year high in the number of claims it is processing. With the furlough scheme set to end soon, there seems to be with no end to this insight and that the tribunal will continue to be overloaded with claims.

The Family courts have also seen around 3 months of backlogs and cases are taking more and more time to be heard.  Sir Andrew McFarlane, the president of the Family Division, does not expect his courts to recover until the new year. ADR methods have been recommended, as far as practicable, until then.

The criminal courts it was reported before the pandemic, were said to have a backlog of 37,000 cases. Now, this is increasing by 1,000 cases a month, with some cases being adjourned until 2022. New technology and ‘nightingale courts’ are being brought in to adjust the delay in the court systems. But it is unlikely to make a huge impact on the already damaged and delayed criminal justice system.

The courts have shown their reluctance to accept proposed delays to trials as a result of coronavirus. Recently, the Ministry of Justice confirmed that lawyers can legally go to court, even if they test positive and are currently self-isolating but then backtracked by releasing official guidance saying that:

‘no one should go to a court or tribunal building if they have coronavirus symptoms if they have tested positive for Covid-19 or if the NHS has instructed them to self-isolate. Instead, you must contact the court in question, and they will decide on the appropriate measures to be taken’.

However, the courts have been ruling against coronavirus related delays to ensure the ‘wheels of justice’ keep moving and backlogs don’t become too severe across the system. The courts have been strict in their approach that each party to a case should do their bit to overcome obstacles posed by the pandemic.

Whilst remote hearings will unlikely become standard practice is has allowed the courts to experiment meaning they are more likely to use these processes in the future, saving costs and time for clients, especially as the tech has already been implemented and has proven quite successful.

Whilst other courts are opening, the Supreme Court building closed on 23 March 2020 and is now conducting hearings entirely via video conferencing facilities.  More information as to papers for filing, time limits, applications for extensions of time, orders and costs can be found on the Supreme Court website.

The most significant change has been seen in ADR methods like arbitration and mediation where the vast majority of hearings and meetings have moved online. The ease of this and cost-saving benefits is likely to mean that many face-to-face hearings become a thing of the past in ADR.

There are attempts being made to extend the opening hours of the courts to reduce some of the strain seen. However, this is coming under a lot of scrutiny and is unlikely to become a reality any time soon.

The coronavirus bill published by the Department of Health and Social Care expands the availability of video and audio link in court proceedings. New Practice Directions (PD 51ZA) have also been introduced allowing parties to agree to extensions of time, without applying to the court, of 56 days in certain circumstances

On 25 March 2020, HMCTS published a page providing an operational summary on courts and tribunals, offering weekly updates. Practitioners are encouraged to check these pages regularly for the latest position.