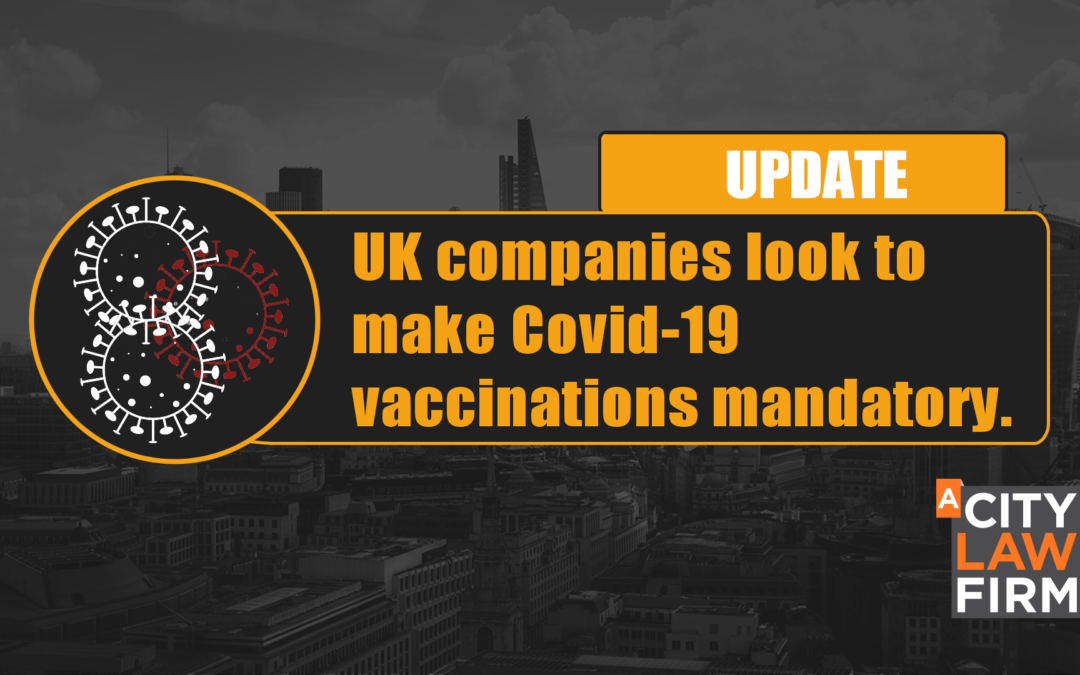 Companies in the UK are looking to implement “no jab, no job” employment contracts for current and future employees. Will this be the future?

This is a subject that before the COVID-19 pandemic would barely have been a passing consideration. Whilst this will soon be a global conversation, British business is at the forefront of the debate, with the vaccination program among the most advanced in the world. One in three adults has already received their first vaccine shot, and the UK government confirmed on Monday that it hopes to offer every adult a first dose of the vaccine by July 31.

The government acknowledged that it would be “up to businesses” if they wanted workers or customers to hold coronavirus vaccination passports. But a clear stance on this is yet to be taken, as there are obvious concerns over coercing people into getting the vaccine, given the legal and ethical questions that follow.

Some ministers expressed fears that such passports could lead to discrimination in the workplace against people who cannot, or will not, receive a COVID-19 jab.

Until further guidance is provided by the government, we expect employers will proceed with caution before implementing mandatory

requirements in their employment contracts or requesting proof of vaccine update from existing employees. . Particularly as it could leave them open to legal claims for discrimination if workers have refused jabs for medical reasons, pregnancy, disability or religious beliefs.

In addition, another pertinent question is how employees would be expected to demonstrate they have taken the vaccine as requesting highly sensitive medical records may not be desirable or practical for either party and create a data protection nightmare. However, international travel amongst other things is likely to be restricted without a vaccine so this may have an impact on certain roles regardless.

In January, trials began for a new Covid-19 passport technology by a biometrics company iProov and cybersecurity group Mvine, with funding of £75,000 from Innovate UK, a government agency that funds business and research collaborations. Such technology will make it easier to demonstrate vaccine uptake, and as a conversation regarding vaccine passports increases over the coming months, such innovation and use of the same in other sectors of the economy such as retail, travel and hospitality will undoubtedly soften the conversation in respect of use in the employment sphere.

Can you force employees to take the jab?

Simple answer, unless it’s in their employment contract no! Any unilateral change to a contract to enforce this would be deemed unfair dismissal. Even if it’s in a policy or the contract this would still need to be approached carefully to avoid any potential discrimination such as asking the older employees to have this or forcing someone against their religious beliefs to take it . Then there is the issue of what if it causes an injury whose responsible?

If this is a policy enforced without discrimination and with evidence of a risk assessment deeming this necessary to protect staff it could be permitted. However, staff would potentially have a claim if their salaries are reduced for example or their role is considered a demotion or you replace then essentially making their role redundant. Again caution, advice and transparency will be key.

Like any employment position review the employment contract and policies first, speak to each other to see if an agreement can be reached and if in doubt take advice.