Where’s the stapler? | What to do if you think an employee is stealing 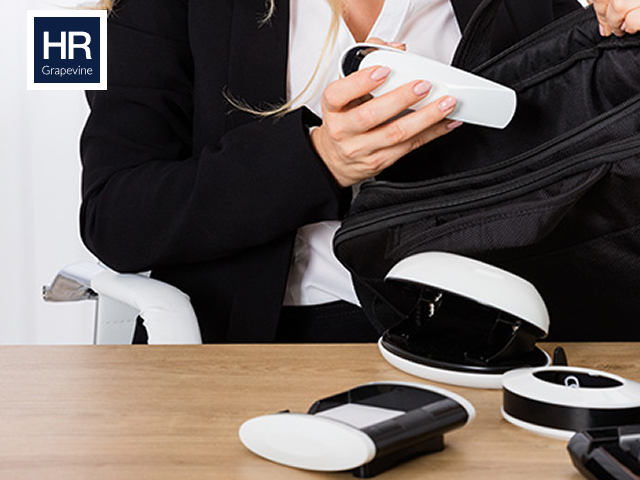 Whether it’s stationery going walkabouts, food vanishing from the fridge or chargers being ‘borrowed’ and never returned, office theft can occur in the workplace.

For employers, HR (and even colleagues) this can cause a bit of a headache, particularly with data highlighting that office theft might be more common that people think.

Theft in the workplace

Following a rise in demand for secure office storage, office furniture suppliers, Furniture At Work, polled 1,000 Brits about office theft in the workplace.

Shockingly, the research found that over one in ten (10.4%) office workers admitted that they have stolen something from their workplace. The study said that, with 24.7million people working in the UK, this means that around 2.5million are guilty of sneaking stationery, food or even money home with them.

The most common stolen items

Furniture At Work’s data unearthed some of the most common stolen items with a variety of things making the list. Ten per cent said that they have stolen money, and eight per cent have confessed to taking a phone.

Food also featured on the list with one in six (17%) stealing food from the communal office fridge, and ten per cent admitting to taking someone else’s mugs. Moreover, 40% said that they have stolen a pen and other stationery from the office.

The professions most likely to steal

As well as providing a glimpse into the most common stolen items, the data also shed light on the professions which appeared to be most likely to steal from the workplace. One-quarter (25%) of those working in law admitted to stealing from their workplace.

According to the research, the list of stolen items can vary from small items such as pens and stationery to other things such as food, phones and even money.

For HR, if employees are stealing (or suspected to be stealing from either the workplace or colleagues), then this could be problematic.

What to do if you suspect an employee is stealing from work?

If it is suspected that an employee is stealing, it is a delicate subject and one in which employers need to tread carefully, investigate fairly and thoroughly. Lee Ashwood, Employment Director at Freeths LLP, told HR Grapevine: “When employers first suspect an employee has stolen something from the workplace, either company property or something of their colleagues, often their first reaction is that the employee should be sacked. However, employers would be wise to bear two things in mind.”
Ashwood went on to explain that employers must be consistent and “even-handed” when dealing with this issue. “Treating all employees the same when an allegation of theft is made reduces greatly the risk of any successful claim of discrimination,” he explained.

Freeths’ Employment Director said that, if the employee has been at the organisation for two years or more, there are some additional considerations. “1) follow a fair procedure; 2) reach a reasonable belief that the employee is guilty; and 3) dismiss only if doing so is a reasonable response to the theft in the circumstances. This is because doing so will reduce greatly the risk of a successful unfair dismissal claim.”

He continued: “A fair procedure involves carrying out a balanced investigation with an open mind, providing the employee with all the evidence and an opportunity at a disciplinary hearing to answer the allegation, and, if they are found guilty, an appeal.

“A reasonable belief of guilt can be described as a credible argument on the balance of probabilities why the employer thinks the employee is guilty. The high standards of proof of a criminal court – that is ‘beyond reasonable doubt’ – are not required.”

The decision to dismiss

If an employee has been found to have stolen something, the legal expert said that there are certain considerations that should come into play if deciding whether to dismiss them. Ashwood continued: “For a decision to dismiss to be a reasonable response will require consideration to be given to all the circumstances including, for example: the employee’s length of service and disciplinary record; whether they have confessed and show remorse; whether they can be trusted in the future; and the value and significance of what they took.”

He shares a feasible example that has probably happened in workplaces to put all of the above into context. “As an example, dismissing a long serving employee with a clean disciplinary record who uses a postage stamp from the stationery cupboard one night when they are voluntarily working late to send a birthday card to their mother is likely to be an unfair dismissal in those circumstances. By contrast, dismissing an employee from the payroll department for stealing thousands of pounds from the company is likely to be fair,” he added.

Separate research compiled by StandOut CV – which was done using Freedom of Information requests submitted to 45 UK police forces – found that almost 19 incidents of employee theft per day have been reported to the police since 2019. Separate data has found that office theft is not just a UK-specific problem.

In fact, data from the California Restaurant Association found that 75% of employees admitted to stealing at least once from their employer. Of course, employee theft can take many forms including Post-It note pinching to stealing corporate data and outright fraud.

Another expert to weigh into the conversation was Karen Holden, Founder and Managing Director at A City Law Firm, who warned that employers should tread carefully as “as false accusations could lead to a grievance”.

She told HR Grapevine: “[Employers) should follow its procedures carefully if set out in staff handbooks or polices; document everything they do carefully including statements; treat all staff fairly if searching lockers for example and allow them to be present; have evidence to hand to support the position before talking to the employee and then ultimately suspending them subject to an investigation.”

With the above data showing that office theft is taking place at work, it is important for employers and HR to know how to handle suspicions and allegations correctly. Otherwise, this could cause more harm than good.