6 game-changing laws that have transformed the LGBTQ community 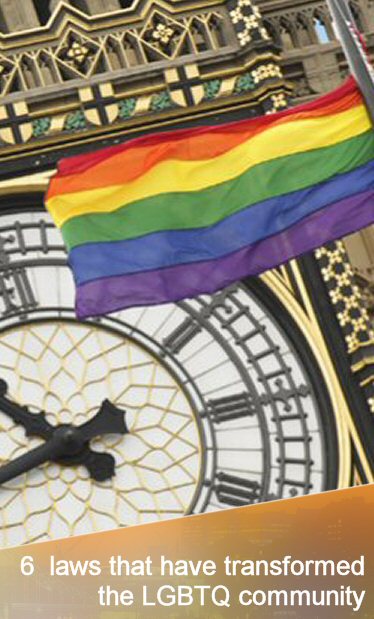 It has been over 50 years since the decriminalisation of homosexuality started – and since then we have made some phenomenal steps forward when it comes to protecting the rights of people in the LGBT community.

Perhaps the biggest and most seminal piece of legislation in recent memory was the Marriage (Same Sex Couples) Act in 2013. But while this was a ‘game-changing’ law, it wouldn’t have been possible had it not been for a number of Acts that were passed over the last few decades.

As someone who sees these rights enforced on a daily basis, I often feel these other acts don’t get the attention they deserve which is why, for LGBT History Month, I’d like to look back and applaud some of these integral laws… as they are the bones around which everything else has been constructed.

This remarkable Act allowed for fundamental human rights, including the right not the be discriminated against for sexual orientation. It was later used to also advance the rights of LGBTQ individuals both for legal protection in a relationship.

In 2000, a case relied on it to lift a ban on gay and bisexual people serving in the armed forces and was further instrumental in equalising the age of consent to be the same as opposite-sex partners.

This Act wasn’t really advertised at the time but ground-breaking for same sex individuals as it was the first time in law that they were able to adopt. While the practice has ebbed away from discriminatory behaviour, it was still not expressly permitted.

This Act is one of the first that allowed the formation of same-sex families who had the right to be considered not just as a person who helped care for their partner’s child but as their actual legal parent too.

This Act marked a significant change in legal standing for couples and allowed the formation of legal partnerships, the sharing of property and the ability to apply to the family courts for a fair resolution on separation. While no one likes going to court, previously LGBTQ couples had to rely on the stricter and more money-based property courts to seek remedy and protect their homes and future.

While it did not equalise marriage in name and still has some lingering faults – it nonetheless compliments the Adoption and Children Act.

When it comes to progressive LGBTQ legislation, 2004 was a good year and this seminal piece of legislation cannot go without mention. While it has recently come under more severe criticism (and justly so, in my view) it nonetheless provided for the first time a mechanism which allows an individual to be recognised by something other than their assigned gender at birth.

Issues include the fact it did not provide any retrospective action, it caused problems for married couples and ignored the basic tenant about the individuality of each person going through the process. But while imperfect it was game-changing and not to be underestimated.

This was quickly followed up by the Equality Act 2010 which added gender reassignment as a ‘protected characteristic’.

While the Act has not eradicated employment discrimination (which unfortunately my employment team still deal with on a frequent basis), in other cases it has had an impact – such the ‘Gay Cake’ case in Northern Ireland too. In this instance a bakery refused to make a “gay cake” with the slogan “support gay marriage” because of their religious views.

The court upheld this was “direct discrimination”.

Although surrogacy was permitted before, the Parental Order process was not available for same-sex male couples. The Act rectified this but also introduced the ability for same-sex female couples to be both named on the birth certificate as the legal parents of a child after using a known donor. This was allowed even if they were not in a civil partnership, provided they went through a clinic and filled the correct forms.

With this Act and the change it brought, LGBTQ families have really flourished and I now meet couples applying for recognition of legal parenthood with increasing frequency. As recently as 14 February, Tom Daley and his partner Dustin Lance Black announced they’re having a family. I am sure everyone will wish them well with parenthood, but it is also clear to show that same-sex families are now in the mainstream and here for good.

That happened though because of this Act and, despite its long-winded title, it should not be underestimated.