Do you need to apply for an injunction? 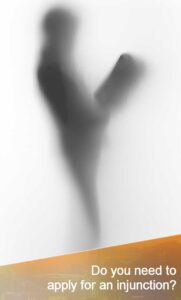 An Injunction is an equitable remedy in the form of a Court Order that usually requires a person to do or refrain from doing something.

However, they may also require a person to positively do something to prevent what would be unlawful conduct leading to damage to the claimant. Injunctions are discretionary remedies and it is for the judge to decide after considering a series of factors whether justice would be served in the circumstances by granting the Order.

Injunctions will not be available unless the case presents exceptional circumstances such as if the loss or damage that would be sustained by the Claimant would not be satisfactorily compensated by an award of money. Injunctions may be granted on an interim or final basis.

The most frequent form of these orders is in the negative, in that the order will require someone to refrain from performing or doing some act in the future. However, they can be used to stop someone who is already doing the act.

Example of when Injunctions would be used include:

An interim injunction may be granted to maintain the status quo between the parties leading up to the final hearing of the dispute. Interim Injunctions may also be awarded to assist the enforcement of rights; such interim injunctions are freezing orders and search orders. They can also be applied for prior to a claim being issued.

A final Injunction may be granted after the outcome of a hearing and may be awarded ‘in perpetuity’ i.e. until it is discharged by the Court.

A Without Notice Injunction can take two forms. It will either:

The important things to consider here are:

If you need to protect yourself or your business A City Law Firm Limited can help you build up a strong case to convince a court to grant you an order. We will advise you on the type of evidence you need, costs and represent you at the hearings.