Happiness in the New Year – means for some to ask how to separate / divorce painlessly? 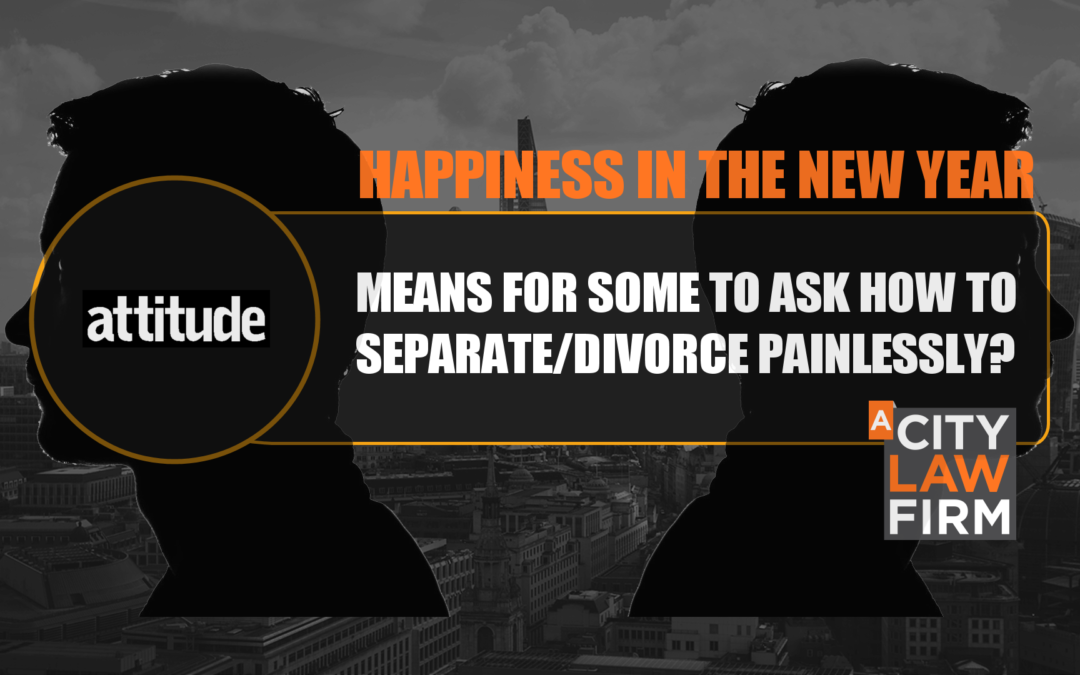 New year’s resolutions, we all make them , but can we maintain it . One aspect of life that’s hard to address is being in a relationship that is not working because it is too financially stressful to leave? Over the holidays though maybe your plans have changed and its time.

Many families do not feel they can break up because the financial pain has a central part to play.  Paying for two households means pulling in all your family resources until you can rebuild your separate lives, that takes a lot of agreement and scarifies between the parties.  The problem faced by the parties is when a civil partnership/marriage / relationship breakdown happens,  it catches you at a time when you cannot think rationally, for the party who wishes to leave there is no real good time to announce it, especially if there are young children involved, especially those families who may have children who are adopted or who have had children through surrogacy.  It brings with it emotions you will have not felt before and exposes some behaviours that you didn’t realise existed.  Christmas and New Year can be a time of excessiveness (even during a pandemic).  It is not always an easy time for some families.

There are many ways of  agreeing to separate and it does not have to be a long drawn out battle if the parties can resolve to work together . More empathises exists more now than ever before to stay away from the Court, due to the costs and many do not want to wait for years to get resolution through the Court Service.

New changes to the law through the Divorce, Dissolution and Separation Act will hopefully take some of the conflict away, No-Fault divorce is due to happen in by 6th April 2022 (with guidance scheduled to be released in February 2022).  This will be a good option for those families who both want an early resolution, rather than using the grounds of unreasonable behaviour or 2 years separation with consent or 5 years separation without consent or 2 years desertion by the other party.  It also takes away the need to blame someone or something and set this out which often causes upset and makes it very difficult for lawyers to maintain a resolution approach.  For parties in same sex marriages the law is a little different, Adulty cannot be used as a ground for divorce, however, infidelity could be used towards the grounds of unreasonable behaviour.

The most intricate part of marriage breakdown is family finances, that is how much your new separated family are entitled to.  If there is no agreement at all, then you may find yourself being advised to make a financial application to the Court for your share of the matrimonial pot in the absence of agreement.  The Courts use a very structured approach using s25 of the Matrimonial Causes Act 1973, the Court will take into account:-

Add Backs and Conduct – what does it mean?

What does it mean in financial applications if you agree to your other spouse’s poor financial behaviour and you remain silent, have you let go of your right to claim back what should have been shared with you?

Spending family money on extra-marital affair – moving money in anticipation for example – spending joint funds on a failed investment , without your knowledge

Can you ask the Court to pick over the wrongs of your marriage  and make adjustments?  Among the things to think about, is whether or not it is worth your while raising any conduct issue – can you be sure that a Judge will find the other party’s behaviour was wrong. This is a complex area within financial applications.

Many couples put up with bad behaviour. However, we have seen some go to extremes spending the matrimonial pot on prostitutes, unnatural sex demands, mistresses, gambling, excessive drug and  alcohol abuse, sacking you if you have run family business together to name a few of the behaviours.  Can you ask the Court to adjust the Asset Schedule in your favour, given that in most cases pole position will be shared on a 50/50 basis?

Sadly, running a conduct case can become expensive very quickly.  Some cases can even collapse under their own weight.  In effect you are asking the Court to financially punish a party to the marriage and undo their spending spree.   In general the Courts do not like “add back” arguments as it distracts them from the delicate exercise they have to perform under s25 Matrimonial Causes Act 1973.  A Court will need to ensure that the other party should still have their housing needs met, save for in extreme circumstances.

However, in saying the above the Court has made adverse judgements where the conduct is “gross and obvious”   There have been cases where the Court will look at a party’s conduct for example an domestic abuse or assisting or taking no steps to prevent a spouse taking their own life.  This is the type of conduct the courts look at, not  I saved the money and the other party spent it, unfortunately, you may still have to share the funds you have saved.

On top of this there is litigation conduct, this is where a party has constantly breached court orders, failed to give relevant disclosure or failed to attend Court.  Judge’s do not like their orders to be broken and they have power to made adverse costs orders to the party in breach.

Clients often ask How should I conduct myself if this happens?  We for sure are all different in how we react to a shock in our lives.  However, it is inevitable that once a party wants to leave a relationship you will need to come to terms with that grief.  The Judges  do not award you for emotional distress because of your relationship breakdown and more than often the Judges will ask why you have not been able to reach agreement and why a party has issued a Financial Application. f is always

We always recommend to settle matters amicably, we can do this by sharing each other’s finances so see what agreement we can reach – negotiations through solicitors.  If there are no savings or assets, it is always worth while still entering into agreement as there have been many cases where a party to the marriage will come back once you receive an asset – this could be anything from a pension you have; inheritance or winning the lottery.  So the best advice is to have financial matters settled.  This will allow you to move on.  Alternatively, there is mediation or Arbitration or if all fails Court proceedings – to be avoided as it is costly.

How should you approach settlement?  This should be approached more like a business deal with no emotional ties if possible.  Depending on needs, the pole position will start at 50/50 depending on where your relationship sits within the criteria of S25 Matrimonial Causes Act 1973 (mentioned above)  The 50/50 position can change subject to what has happened.  Assets before the marriage can usually be ringfenced if it is not a “needs” case.

You may have recently heard on the news that the UK jurisdiction is one of the top places to get divorced and settle your finances.  It is one of the most generous jurisdictions there is.  The recent case of the Ruler of Dubai has been ordered to pay his former wife and their two children a record breaking £251.5m.  Whether he has the assets in the jurisdiction to pay is of course a different matter.  However, the legal bill is estimated to be approximately £70m over 3 years.  Now the finances have been settled, I think most will agree that it is sad to look at a broken family with children who face a traumatic relationship with their parents.  Afterall, parents there to pave their way for their children and how to behave.  This case was of course was a big exception given the issues involved.

Here at A City Law Firm we can take you through the delicate steps involved.  Should you have any queries please do not hesitate to contact janette@acitylawfirm.com