How Emojis Are Creeping Into The Courtroom 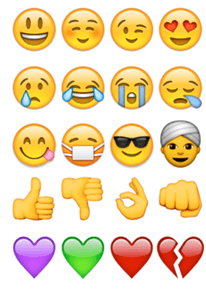 Jurisdictions around the world are starting to recognise that the law must evolve in conjuncture with language and digital communication.

Until now, courts have traditionally relied on hard evidence such as documents, words, audio and video recordings as evidence. However, the strong influence of popular culture and widespread use of Emoji as an enhancement to language means that it has been necessary for the courts to cast the evidential net much wider.

People use Emoji’s in conjunction with words, to demonstrate emotion, mindset, tone, intention and mood. It seems very likely that their use within the courtroom will continue to increase and it seems reasonable to assume that British courts will increasingly consider and draw inferences from Emojis in evidence, especially given their ability to convey intent behind civil action and criminal charges. How far this goes is yet to be seen.

Interestingly, electronic databases such as Westlaw or Lexis aren’t currently set up to handle or display Emojis.
However, a recent family court ruling handed down by Mr Justice Peter Jackson, which is thought to be the first in English legal history to incorporate an Emoji, or web symbol, to explain a point of evidence, incorporated an Emoji in his judgment.

A judgment is the kind of document in which one might expect to find daunting legal terminology, interspersed with Latin phrases or even a smattering of Norman French. But one High Court judge has gone to previously unheard-of lengths to make a judgment in a family court case comprehensible even for the children it affects – by replacing dry terminology with a battery of down-to-earth phrases and even a smiley face symbol.

The use of an Emoji by a judge is clearly novel, but it seems very likely that this will not be the only case of its kind, as future judges will also choose to incorporate them descriptively into their future judgments, as the prevalence of Emoji’s in modern day communication continues to grow.

In the meantime, there is a need to recognise the impact of technology on court procedures and processes including how this additional body of evidence can have the potential to shape the outcome of proceedings and even be used to help in describing their outcomes.

“The law cannot stand still. It must keep pace with changes in society. The law provides the framework within which members of society and economic actors operate. It provides guidance for endeavours, public and private, and sets the parameters of lawful behaviour. If the law falls behind the times, it cannot perform these functions properly.

It is an undoubted fact that societies evolve, and that considerable change has occurred since the 1990s in the economy, technology, medical science, and the constitution. Judge-made law must respond to that change to the extent that it can properly do so.”

It is therefore clear that a paramount objective of the English legal system is to keep-pace with societal change, and thus the courts must even consider such abstract facets of our communication.

Importantly, the admission of Emojis into evidence should serve as a timely reminder that what you might consider harmless Emoji banter between friends, partners or colleagues could end up admissible evidence in Court.