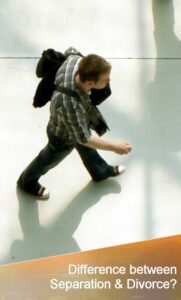 A divorce legally puts an end to your marriage and enables you to separate and legally divide your assets and finances from your partner’s.

In contrast, during a legal separation you draft together a settlement agreement that sets out the rights and responsibilities that will apply to each spouse while they are living apart. During this time you are still legally married despite choosing to live separately.  It is worth noting that this is different to a decree of judicial separation which can be arranged through the family courts.

What is a Separation Agreement or Deed of Separation?

These are both essentially the same document which set out an agreement made between the spouses.  It can address a multitude of issues such as: custody and residency arrangements for your children; visitation; maintenance and the division of assets and debts, including the matrimonial home and mortgage.

An agreement of this kind is not a court order and the courts are not involved in its preparation.  Instead, this is an informal settlement agreement which you will both feel morally bound to keep but there is no legal penalty for failing to follow all the terms. If you later apply for a divorce, the separation agreement can be shown to the court for its opinion on whether there was an agreement and whether the agreement has been broken so it can be persuasive.

What is the advantage of a Legal Separation to Divorce?

There are advantages to having an agreement in place which include the following:

How do you apply for a Legal Separation?

The same issues are considered during separation proceedings as they are in the divorce process.

When preparing to draft the separation agreement, each party must produce full and frank financial disclosure, showing documentary evidence of their assets and liabilities. Each party exchanges this information with the other.  The main difference is that when you are not applying for a divorce or judicial separation you do not have to appear in court but rather you only need to agree terms usually through a solicitor.

Essentials to consider upon separating:

Can we apply for Divorce at a later stage?