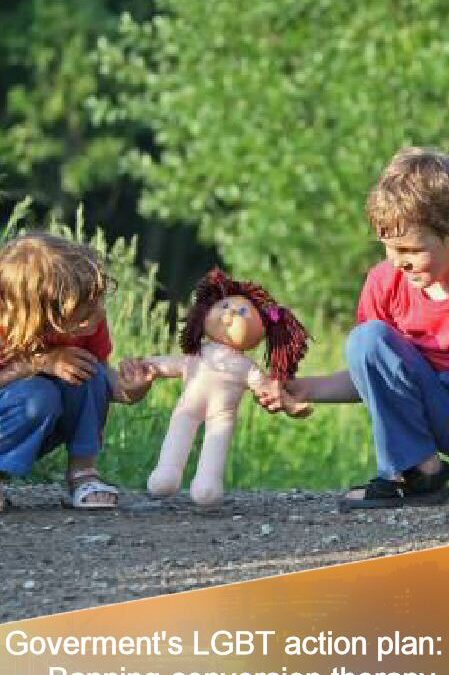 THE GOVERNMENT'S LGBT ACTION PLAN: BANNING CONVERSION THERAPY
Following the UK government revealing its LGBT Action plan, our lawyer takes a look at the logistic of enforcing the proposed ban of the controversial practice of conversion therapy...

The UK government's LGBT Action Plan sounds a little like the blueprint for an upcoming war game, rather than a 32-page, 75-commitment based document aimed at pulling down barriers for the LGBT community in both their public and private lives. Yet one promise causing the most interest appears to commitment to finally ban the so-called 'gay conversion therapy':

"We will bring forward proposals to end the practice of conversion therapy in the UK. These activities are wrong, and we are not willing to let them continue. Led by the Government Equalities Office, we will fully consider all legislative and non-legislative options to prohibit promoting, offering or conducting conversion therapy. Our intent is protect people who are vulnerable to harm or violence, whether that occurs in a medical, commercial or faith-based context. We are not trying to prevent LGBT people from seeking legitimate medical support or spiritual support from their faith leader in the exploration of their sexual orientation or gender identity."

It is rarely the child who finds the problem with their own sexuality once they understand and accept it, rather it is those around them; those who would otherwise provide support. LGBT charities still exist to tackle those occasions when parents are unable to accept the reality of their child's sexuality – if you want to appreciate the real scope of the problem, just take a glance at the homelessness statistics and the functions of the Albert Kennedy Trust. The government's promise to introduce both legislative and non-legislative options to prohibit "promoting, offering or conducting conversion therapy" is an important and substantive change in tenor that should not be underestimated.

The conversion therapy makes the fundamental assumption that sexual orientation is a psychological disorder that can be 'cured'. Previously, while there was no general acceptance of it, the UK government's position was that the regulation and code of ethic for any regulated practitioner would prevent LGBT individuals being offered or undergoing this treatment. The government would not legislate for the sake of it and nor would they criminalise the conduct.

There isn't harmony or unified thinking about this across either Europe or the rest of the world. Some countries, like Brazil, Argentina and a few US states have banned it, but other countries have still taken no real affirmative action.

How can the government ‘ban’ conversion therapies?
The government has may tools in its arsenal when approaching a ban. The big guns of the arsenal could be the criminalisation of the therapy itself, but this could also drive the practice further underground and some would argue that it is a practice which people 'choose' to undertake. Criminalising the promotion of conversion therapy is another route, or introducing hefty fines for those practitioners caught conducting or condoning it. How would you regulate it though? Those who are professionals are already regulated by their professional body which has already taken steps to prevent it.

Some, including myself, have argued previously about how the government has simply been burying its heads in the sand on this point and failing vulnerable children who are not being taken to regulated professionals, but camps involving the most inhumane physical and psychological torment.

Whichever way the government shapes this, a root and branch approach is going to be needed to get this from the core and strip it back to a fundamental understanding in all sections of society. Gender identity and sexual orientation already have incredibly high levels of suicide and depression amongst young adults and children. It is important that they see this change and the support that it brings them when society steps in to say, "This is not just wrong, it is abhorrent. This will not be tolerated in any form anymore."

For the most determined parent, could they still take their children abroad for the therapy? How can we protect and prevent this without a wider consensus in foreign countries as well? I would hope the UK government has a plan to deter this happening, but what safeguards can they put in place? Here we would hope to see non-legislative change, promoting better understanding and LGBT education in schools, building relations with different parts of society and adding these forms of harm to child protection officers in schools and local authorities. The Church of England acknowledged this in 2017. Will other community leaders openly do so too?

The LGBT Action Plan is a tome of information, statistics and ambitious promises. It highlights many other facts, such as disclosure of peoples' sexual orientation at work and the high level of discrimination in the workplace that still remains. While we have legislation in this area already, the absence of real and substantive legislation or debate in the area of gay conversion therapy is astounding. Whether the government of the day decides to criminalise the practice, or place deterrents in some other form, this will be hailed by the LGBT community as a step towards not just equality but basic, human dignity.

The more cynical side of my mind remains with a question though: will the government be able to create a robust enough system of 'prevention' which is better than the 'cure'?