Why Employers need to avoid the Employment Tribunal 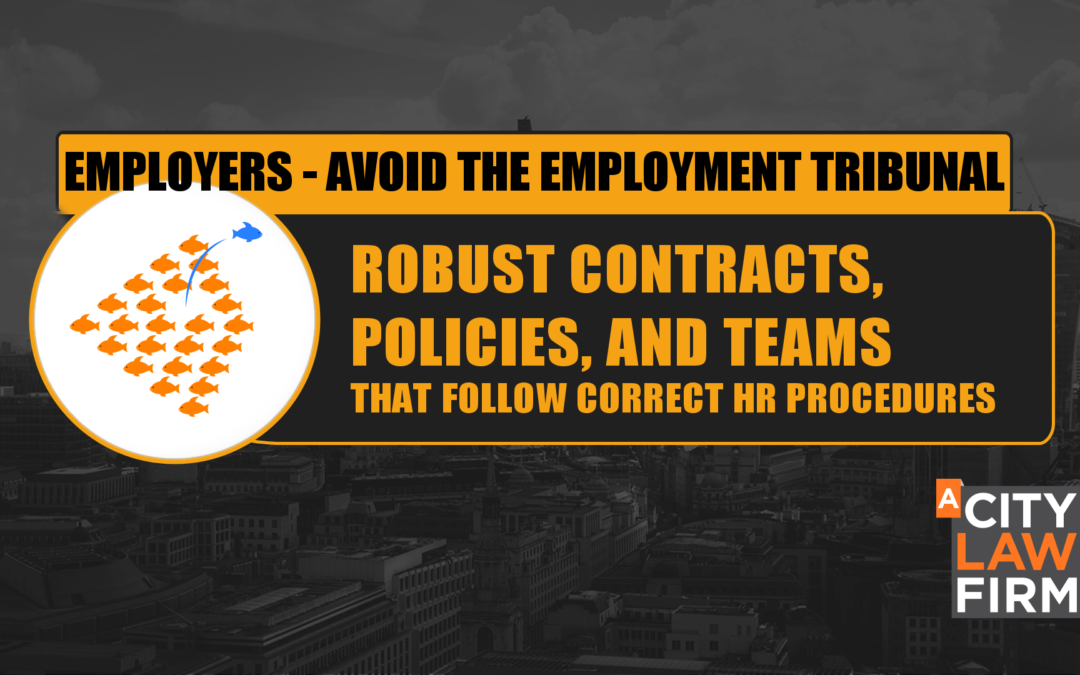 Instead they need : Robust Contracts, Policies, and Teams that follow correct HR Procedures

As an employer and an employment solicitor it is fair to say we’ve had our fair share of employment cases at the tribunal acting for the defendant and for the claimant.  We were online conducting an Employment Tribunal case on behalf of the Defendant just before Christmas, and it is our opinion the system is broken.

For the reasons given below, we encourage our employer clients to have robust and transparent contract terms and policies available, which must be communicated, monitored and enforced by HR at all times. It is this structure and transparency that we hope will prevent claims, give you or your solicitor adequate clarity to resolve, if not settle, matters before the need to pursue further in the Employment Tribunal. I hope with communication, a transparent structure and terms this can be avoided at all costs. We have identified below our advice on how to prevent, resolve and seek best practice but, of course, there are no guarantees.

Employment Tribunals have been historically free of charge with no hope of recovering costs (if employees are not overtly vexatious ), in a means to facilitate employees that have lost their job and income, to pursue justice. As such, whilst there is access to a fair hearing and evidence disclosure, both parties testify ,the whole system has ultimately been set up predominantly to protect claimants. Where an employer engages a barrister or solicitor, incurring legal costs, you would think they would be best placed to successfully overcome cases and would be doing everything correctly. However, often this is seen as an issue for the Tribunal where the claimant is not represented and therefore perceived as they have an unfair advantage. This means the claimant is often given more explanations and allowances by the tribunal, and offered a greater degree of leniency. It also means that, even if the employer is successful, it is unlikely any contribution towards their costs or business distraction will ever be awarded, unless the employee acted overly vexatiously. Therefore, is a success ever really a win for the employer?

In a recent case, we represented the employer, the chair struck out 4 of the 5 claims before we went to a final hearing (the result of several interim strike out hearings), these were though at a cost to the employer, as the claimant represented herself. As a result , of a lay person representing herself, the Chair was hesitant to strike out a discrimination case since the claimant was not legally represented, but after a two day gruelling hearing this claim was, likewise, lost. The employer did everything right, a lawyer prepared the documents and bundle, counsel represented them and they explained the facts as they knew them. The Chair was very empathetic to the claimant and gave her much leniency, which was not afforded to the employer. In fact, even during judgement it was clear that finding for the defendant bothered the Chair; he suggested they were placed at an advantage being represented . It was clear that the leniency and bias for the employee was so significant that it seemed to reduce the case of the Employer.

It was, for a Solicitor, an awful thing to witness as we had seen the stress; business distraction and costs incurred by the employer, who in our opinion, counsel’s opinion, and indeed as later supported by the tribunal, had done nothing wrong. However, despite playing by the rules and taking matters seriously by hiring legal representation the successful employer was penalised by costs being denied and in no uncertain terms their counterclaim forced to be dropped. This cost thousands of pounds; hours out of the business; they were humiliated by the Tribunal’s statements, they were told there was no successful claim against them by the employee, but they did not see this as a win. They decided the system was bias and broken against giving employers a fair hearing, which during this experience, did appear the case. The case is also listed for the public to read and the Claimant was allowed to make inflammatory; unsubstantiated statements that were neither pleaded or evidenced, again making this an unfair hearing for the employer.

As such, we sadly must encourage employers at all costs to avoid the Employment Tribunal system as frankly it is gruelling; not cost effective and not geared up for a fair outcome. If an employer needs to seek redress, the county courts are best for breach of contract, if applicable, as this means both parties pay costs which can assist in  focusing the parties minds; the courts are objective and not biased to either party and costs can be awarded to the successful party. It’s not a perfect system; it’s not cheap or swift, but it is objective and fair.

To avoid the risk of entering this system, we instead suggest:

We understand settling with an ex-employee, if you have done nothing wrong, won’t be your first thought or desire. We hope it won’t get that far and will be diffused, but serious consideration to settlement as opposed to the costs; distraction and the gruelling path the tribunal will lead down, needs consideration. It seems the system is biased towards employees no matter the decisions or position stated.

An Employment Tribunal claim , as stated, was always free of charge to initiate in order to offer employees a fair opportunity to address their claims without the obstruction of legal costs. However, this led to a large volume of claims , many of which were considered frivolous and vexatious. A pilot scheme to charge a tribunal fee was initiated and this substantially reduced the number of claims that were made.

Many people saw this as a positive move as this was a genuine deterrent against frivolous claims, where employees used this to force a settlement or pursue a vendetta. However, due to the significant drop the concern from the government and other parties was that employees, without the benefit of a job, thus the money for the fees, were unable to access the system and address their potentially unfair working practices and thus be protected against dismissal for whistle blowing and the likes.

The reason the civil court, whilst not perfect, is known to be more robust and manageable is because both the parties must act reasonably to maintain sensible legal cost implications as both are at risk at paying each other’s costs if they lose. The Part 36 system of making and accepting offers also makes the parties consider sensible settlement proposals which can include cost contributions. So be it a claimant or defendant the system encourages both to act sensibly; consider a compromise and should it go to court the judge can assess their actions and contribution to the process in terms of how it awards costs, or not.

This however, does not apply to the Employment Tribunal system as there is no real risk of the losing party paying costs (unless they have acted unreasonably,) so there is no deterrent to act fairly or sensibly, especially if you are not paying legal costs. Only the employer can make a settlement proposal really in these scenarios, so even if the employer is able and correct to defend a claim they are almost pressured into making an offer if the costs outweigh their legal costs, but likewise an employee may have to accept far less than they actually deserved for the same reason.

It is for this reason, our opinion is protect, communicate and resolve before going down the Employment Tribunal path, where possible.